Welcome to our Stoptober SmokeFree Hull Newsletter, packed with lots of useful and fun tips on coping with cravings, activities to try, and success stories, to support you on your smokefree journey.

Our SmokeFree Hull team is here for you, we’re all passionate about helping our local community stop smoking and making you feel happier and healthier. So, let’s get to know them better!

What do you like to do in your spare time?

I spend time with my family and children.  We like going to the beach, taking long walks, and watching TV – I love all the home-makeover shows!

If you had to listen to one song for the rest of your life, what would it be?

I’m not sure I could pick just one song, I really enjoy all different types of music and different eras of music.

What job did you want to do when you were younger?

I wanted to be a nurse when I was very young.  I was always trying to take everyone’s temperature!

Why do you enjoy working as a stop-smoking advisor?

I like working with people and enjoy helping them to make positive changes in their lives. I like listening to others and helping them to feel more confident in making changes.  It is very rewarding when people succeed in quitting smoking, and it makes a big impact on their life and their family’s life.

What are three items you’d take with you to a deserted island?

My mobile phone, a huge bar of chocolate, and a private plane to get home as I would not survive in the wild for long!

Why did you choose to work in smoking cessation?

I have always enjoyed working with people and within healthcare.

Do you have any pets, and what are their names?

No pets…. I had a budgie when I was younger called ‘Magic’!

If you could pick up a new skill or hobby in an instant, what would it be?

To play the piano or learn a new language.

What would be your idea of a dream holiday?

Somewhere warm and sunny with a private beach and lots of cocktails.

The month of October is the time that a lot of people think about stopping smoking, and to show our support, our advisors have put together some helpful tips on staying smokefree for Stoptober and beyond.

We believe in you!

Get rid of smoking paraphernalia

Whatever your reasons for quitting smoking in Stoptober, for your health, your family, or pets, financial motive, or because you just wanted to, don’t lose sight of your goals, and know that we’re here to support you.

"I started smoking when I was 13 or 14 years old, this was firstly at school and then I carried on throughout my life. My daily routine was to wake up and have a cigarette every morning alongside a coffee. I would then sit and have three cigarettes in the space of 10 minutes, before going to work, and then I would be smoking throughout the day too. I would then have more cigarettes at home, and it just became a habit really.

When I had my first child, I stopped smoking throughout my pregnancy as I knew it was the best thing to do for my daughter, but when she was four months old, I started smoking again, as the stress of having a newborn, and the fact that she suffered from cholic and didn’t sleep, made me turn to cigarettes to cope.  It was a coping mechanism and then I thought that it was too late to stop.

My daughter is 14 years old now, and she’s tried a cigarette, seeing her smoke, and knowing I smoked at a young age too, made me mad and I told her off. Even my youngest daughter will put a lollipop in her mouth as if she’s having a cigarette, which isn’t good. I wanted to stop smoking for my family, to be a good example for my children.

I also work as a carer in a nursing home, and I could see patients with COPD getting Covid, and I knew I didn’t want to end up like that. They would struggle with their breathing and would cough all the time, so this helped motivate me as well. My mum has COPD as well and she still smokes, I keep telling her to use the service too.

I’ve tried to stop in the past, I used patches and Champix previously, but the cravings were always too strong.  I just couldn’t settle with it. I’ve used the SmokeFree Hull service before as well, and they were really helpful at the time, but I just wasn’t ready to fully commit back then.  I suffer from bad migraines and the stress from smoking was making my migraines even worse, so I knew I had to give it up. I first cut down then, by smoking in the morning and then only vaping in the afternoon.

I remember the day it clicked properly for me though, I woke up and went to work, it had been a stressful day, and stress was always my trigger, so all I did was drink coffee and smoke. On this day I realised I’d had so many cigarettes without even realising it. So, I officially quit on the 24th of April after ringing the service for support again. I used the inhalator and patches together this time and it worked.

I struggled initially especially in my second week, but I’m doing really well now. If I ever get the urge to smoke, which I still do sometimes, I just keep myself busy or occasionally still have a drag on my vape, but it has very low levels of nicotine in it.

I can feel the benefits of not smoking now, I have more energy than when I was still smoking. I used to have an unhealthy lifestyle and only drink coffee and have cigarettes, whereas now I enjoy food again, which has allowed me to gain weight in a good way. I have much more of an appetite now, and my smell and taste have improved which is great.  My mum still smokes, but I insist she smokes outside, so it’s not around the kids, as I can really tell the difference now, and it smells horrible.

My stop smoking advisor Emily was really supportive and helpful, she was always prompt with my NRT products and gave me good advice. I enjoyed our calls together and the support she provided.

I would advise anyone thinking of stopping smoking, to give the SmokeFree Hull service a call. However, I would say that you must be ready to quit, only you can decide this for yourself, you cannot be told when to stop. You call the shots initially, and then the service is there to help guide you through it.

I’ve already recommended the service to a few of my friends, as I know they’ll feel the benefit too, the best bit is their support, and the process is really easy in collecting your treatment too!

Staying healthy and smokefree means more than just stopping smoking. Eating a healthy, balanced diet is an important part of maintaining good health. Plus, in October, there are some great autumn recipes to keep you warm and smokefree. Here's Stop Smoking Advisor Chelsea's recipe for pumpkin soup.

Pumpkins are a valuable source of fibre, vitamins, and minerals. They contain Vitamins B6 and B12, which help to convert foods into energy, and fibre from the flesh of the pumpkin helps with stabilising blood sugars and makes you feel fuller longer.

Pumpkins also contain Vitamin C which not only helps to keep away colds and flu, but helps keeps your skin, teeth and gums healthy. Smokers have less vitamin C than non-smokers, so having more vitamin C in your diet is beneficial, and enhances your quit too!

How to make it

We tell everyone about the importance of having a healthy lifestyle when stopping smoking, this not only helps with your quit attempt but also makes you feel happier and healthier in general.

Below are some great tools and activities you can try yourself, showing there are lots of good reasons to get moving and look after your mental health. 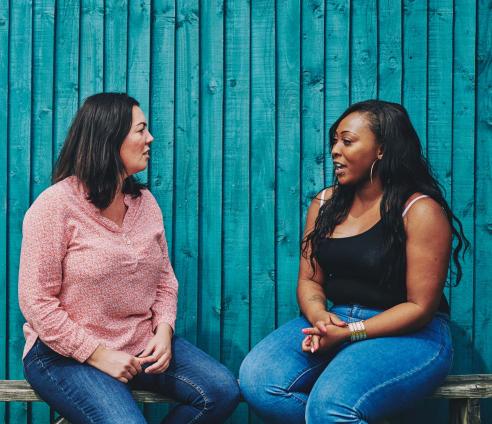 We’d love to hear from you!

The service has had to adapt in many ways over the past 18 months, and we want to know what has worked, and what we still need to improve upon.

Your opinion matters to us, so please complete the survey here, so we can do better!

Go back to the SmokeFree Hull news and stories page